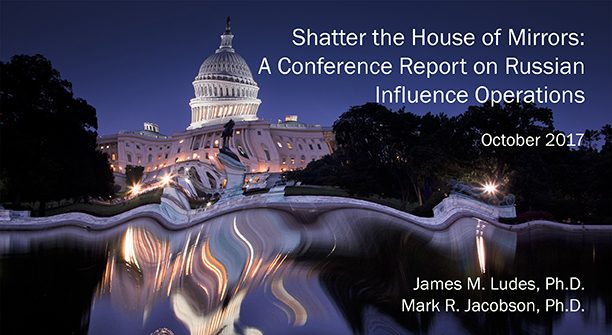 Newport, RI – Vladimir Putin’s Russia is engaged in a well-financed and determined campaign to undermine democratic political and social institutions as well as international alliances, and to remove resistance to Russia’s foreign policy objectives. Russia has the motive and the means to do so, according to a new report from the Pell Center at Salve Regina University. “Shatter the House of Mirrors” is based on the proceedings of a closed conference held at the Pell Center on the campus of Salve Regina University in Newport, Rhode Island, in June of 2017, drawing together 36 researchers, technologists, scholars, journalists, and policy experts from North America, Europe, and Australia.  The invitation-only conference operated under Chatham House Rule, so participants and their affiliation may not be identified.  The report was authored by the only two public participants in the conference: Dr. James M. Ludes of the Pell Center at Salve Regina University and Dr. Mark R. Jacobson of Georgetown University.

The report recommends broadening the public focus beyond possible crimes committed by President Donald Trump and his staff during the 2016 campaign.  “The Russian effort is larger than the election of a president,” wrote Ludes and Jacobson. “It seeks to sow division within the United States and within the broader community of western democracies. While crimes need to be prosecuted if they occurred, the public should be sensitized and their attention reoriented to combat the broader Russian effort to weaken our faith in our free institutions, and undermine the political cohesion of the United States.”

“Shatter the House of Mirrors” is available for download here.