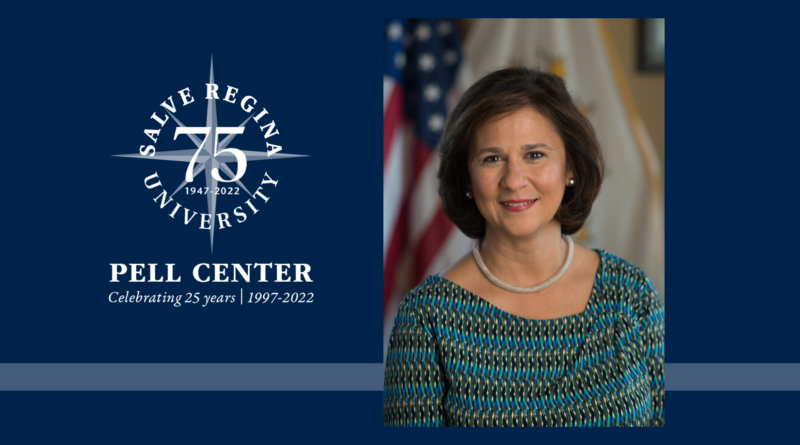 NEWPORT, R.I. – Outgoing Rhode Island Secretary of State Nellie Gorbea will join the Pell Center for International Relations and Public Policy at Salve Regina University when her term in office expires in January 2023, the University announced today.  She will be a visiting senior fellow working on cybersecurity and disinformation, two issues she concentrated on during her time as secretary of state.

“We are thrilled to welcome Secretary Gorbea to the Pell Center and Salve Regina University,” said Jim Ludes, the University’s Vice President for Strategic Initiatives and Executive Director of the Pell Center.  “In her time as Rhode Island Secretary of State,” he continued, “Nellie established herself as a national leader on election integrity and took meaningful steps to bolster confidence in American democracy.  We are thrilled she will be able to continue that work at the Pell Center.”

Reflecting on her time in office, Gorbea said, “as Rhode Island’s Secretary of State from 2015-2023, I have been privileged to lead the RI Department of State at a time of increased challenges to our democracy. Much of my effort focused on increased access to the ballot box while simultaneously increasing the integrity and security of our elections.”

In fact, Gorbea’s leadership was essential.  During her tenure as Chief State Election Official, she noted, “we modernized elections in Rhode Island by passing laws that led to online and automated voter registration, acquiring state of the art voting machines with paper ballots as well as electronic poll books, creation of an online Voter Information Center for voters, and a public marketing campaign that helped yield record numbers of voter turnout – including during the 2020 pandemic.”

Gorbea’s tenure also coincided with the time when election administration was designated by the U.S. Department of Homeland Security as “critical infrastructure.” Here again, Gorbea’s leadership was important nationally.  She was a founding executive advisory board member of the Election Infrastructure – Information Sharing and Analysis Center (EI-ISAC) where she helped inform critical decisions on protecting American democracy’s cyber infrastructure. Perhaps most importantly, her contributions led to collaboration between the Cybersecurity Infrastructure and Security Agency (CISA) and the National Association of Latino Elected and Appointed Officials (NALEO) that helped inform against national misinformation and disinformation attempts in Spanish during the 2020 and 2022 elections. In November 2022, she presented some of this work at the Conversations on Democracy in a Digital Age conference hosted by the John S. and James L. Knight Foundation.

As a visiting senior fellow in democracy and cybersecurity at Salve Regina University’s Pell Center, Secretary Gorbea will seek to further understanding of gaps in how misinformation and disinformation erode the faith in our democratic structures, especially among Latinos.  Key among her activities are plans to host a regional convening to build the capacity of Latino elected and appointed officials and key community organizations to combat Spanish-language mis- and disinformation. This convening will take place in the spring of 2023.

“The Pell Center at Salve Regina University is building an impressive effort to protect and promote democracy in Rhode Island and across the United States,” said Gorbea.  “I’m excited to join them and contribute to this vital work.”

Nellie Gorbea was the first Hispanic elected to statewide office in New England and was elected to serve two terms as Rhode Island Secretary of State. She is a graduate of Princeton University’s School of Public and International Affairs and earned a master’s degree in public administration from Columbia University.

The Pell Center for International Relations and Public Policy at Salve Regina University is a multi-disciplinary research center focused at the intersection of politics, policy, and ideas.  Celebrating its 25th year, the Pell Center is named for Rhode Island’s long-time Senator, Claiborne Pell, and works to honor his legacy by promoting American engagement in the world, effective government at home, and civic participation by all Americans.