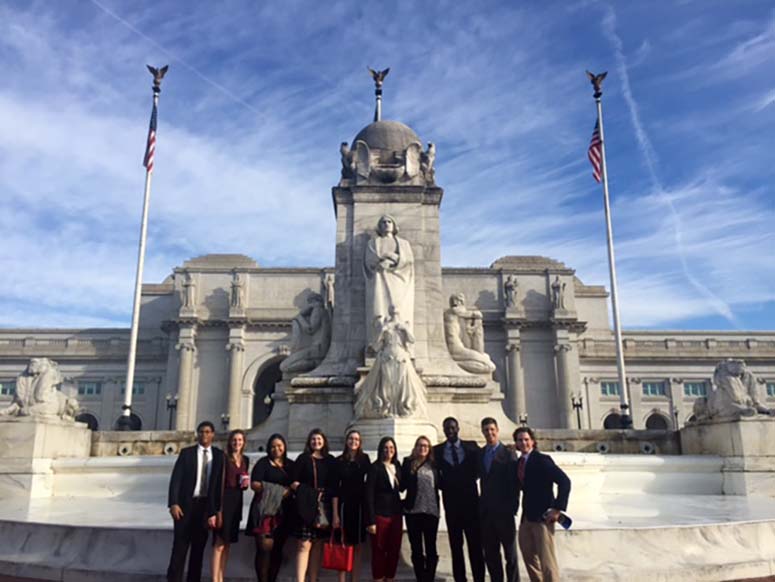 Many of us had never been to D.C., and immediately after getting off of the metro (an experience in and of itself), the uniqueness of the city was striking. Built during a time when America was struggling to develop a national identity, the awe-inspiring structures closely mirror Roman and Greek architecture to reflect their classic ideals about democracy and government.

Our first stop was the Capitol building, where the fellows visited s-116, the room at the end of the Brumidi corridor where the Senate Committee for International Relations meets. It was inspiring to stand around a table where figures such as Presidents Obama and Kennedy, Vice President Biden, Senator Shaheen, and our very own Senator Pell had sat discussing international relations and welcoming heads of states from other countries. Next, we toured the Capitol building itself, and while it is currently undergoing significant restoration and maintenance, it was still impressive to walk where history was made. We were able to see the old senate and Supreme Court chambers, as well as the Crypt and part of the mural on the dome in the rotunda. Even with most of the ceiling covered, you could still see President Washington sitting among the Angels. Below the Capitol building is the relatively new visitors center, which is a spectacle in its own right for the numerous statues that are representing of each state, including an large replica of the Statue of Freedom, the original of which sits atop the dome of the Capitol.

Meeting the Senators and Representatives from Rhode Island was an incredible experience. Senators Reed and Whitehouse were very down to earth and engaged us with conversation about leadership – what it means to them, their influences, and what aspects of leadership are most important in their jobs. Senator Reed explained leadership as a cooperative discipline, the ability of one person to willingly work with others, despite conflict, for a greater good. Senator Whitehouse explained that in addition, honesty is an equally important characteristic because it helps people to have trust in you as a leader. We were quite surprised when the Senator started rifling through his wallet and, after a moment, retrieved a cut out obituary for Richard Winters which included a quote of his. Whitehouse read from it that you are a leader “if you can find that peace within yourself, that peace and quiet and confidence that you can pass on to others, so that they know that you are honest and you are fair and will help them, no matter what, when the chips are down.”

Rep. Langevin and Cicilline were also tremendously welcoming, discussing with us the perception of congressman and the struggle with bipartisanship that congress has been facing in regards to leadership. It was an phenomenal opportunity to talk with them because they were  seemingly no longer representatives of the congress,  but real and candid men concerned for the good of their state and nation, and the interest that young people have in government and politics. Finally, the fellows attended the much anticipated reception at the Embassy of Liechtenstein. The ambassador, Claudia Fritsche was a lovely host, welcoming all of us to D.C. and introducing us to the guests who all seemed to have a relationship to Senator Pell and Nuala Pell. It was a wonderful change of scenery after a long, once-in-a-lifetime day on the hill. It was surprisingly nice to find that many of the guests sought us out to speak about our backgrounds and our interest in leadership in a more casual setting – if you can consider the ambassador’s beautiful and modernly decorated residence casual!

After much reflection of today and through the leaders we spoke to, we came away with not only a new understanding of the many definitions of leadership, but also a much greater appreciation for Senator Pell and Nuala Pell, the namesake of the leadership program. Their legacy is very much alive and well, as related through personal anecdotes of leaders we spoke with. Senator Reed described Claiborne Pell as a man who was a “gifted and humble statesman” who didn’t feel the need to always be on top, rather someone who kept in mind the big picture. Nuala was repeatedly described as gracious, intelligent and supportive of her husband, while humbly breaking the glass ceilings of the nation’s Capitol and making herself heard and being involved in politics in a time when women generally weren’t. – Kay Scanlan, Nuala Pell Leadership Fellow