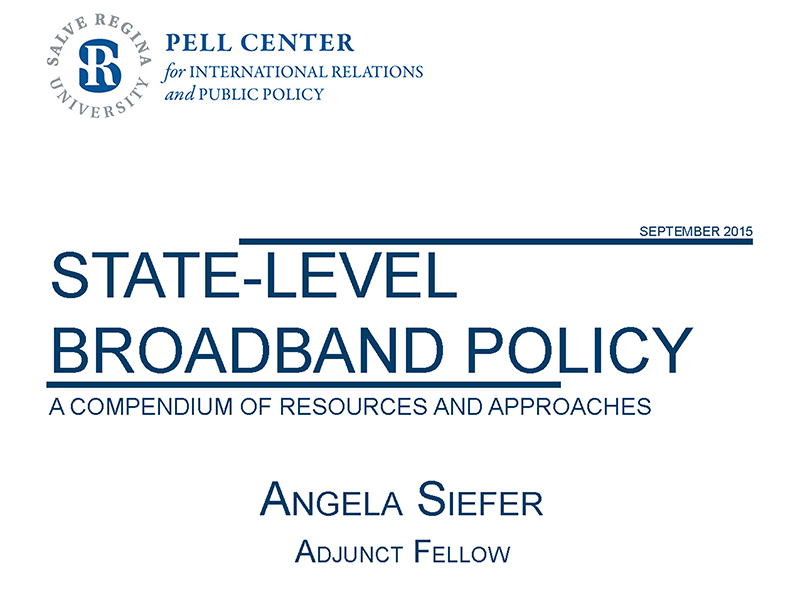 The Internet is a tool that Americans use every day to work, to locate information, to communicate, to shop, and to play. More broadly, access to the Internet can help strengthen communities, improve schools, heighten public safety, and create a more responsive relationship between government and citizens. Perhaps most importantly, many believe that the availability of broadband Internet is a key enabler of economic growth.

While many decisions about broadband deployment are made at the local level, state governments have an important role to play. In a new study from the Pell Center for International Relations and Public Policy, Adjunct Fellow Angela Siefer explains why broadband access is important and how states can support the adoption of smart broadband policies.

According to Pell Center Executive Director Jim Ludes, “State Level Broadband Policy: A Compendium of Resources and Approaches” is different from other Pell Center studies. “We began thinking we needed to make the case about why broadband was important,” said Ludes. “But what Angela helped us understand was that it’s not a matter of why or whether, it’s a question of how. She’s written a thoughtful study that helps state-level policy makers think through their broadband policy choices while pointing to real examples from progress made in efforts from Maine to California.”

About the author: Angela Siefer has been working on digital inclusion issues since 1996, beginning with a University of Toledo graduate school assistantship coordinating a regional community technology network. She served as executive director of the Ohio Community Computing Network, distributing funds to and supporting community technology centers. Siefer has been involved with the Broadband Technology Opportunity Program of the National Telecommunications Information Administration (NTIA) through participating in the creation of two successful Sustainable Broadband Adoption (SBA) grants, implementation work on OneCommunity’s SBA grant (Connect Your Community) and serving as an NTIA consultant researching and writing best practices for the NTIA Broadband Adoption Toolkit. She coordinated two broadband conferences for OneCommunity and one for the Schools, Health and Libraries Broadband Coalition. In 2013, on behalf of the Online Computer Library Center, Siefer led an Institute of Museum and Library Services (IMLS) funded project supporting communities piloting “Building Digital Communities: A Framework to Action.” In 2014, she conducted research for the Center for Digital Inclusion at the University of Illinois for another IMLS funded project, “Inclusive Gigabit Libraries.” She is now an independent consultant working directly with communities to increase broadband access and use while also leading the newly formed National Digital Inclusion Alliance.