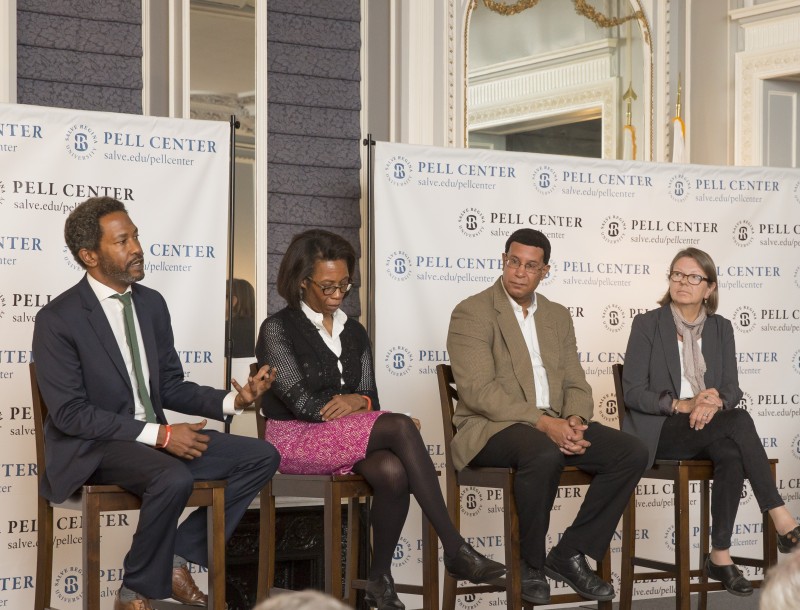 The Pell Center had the privilege of hosting four excellent speakers on November 1, 2016. The lecture centered around the question: how do we as a nation memorialize the slavery and injustice of our past?  Each speaker focused on answering this question in regards to slavery in New England. Joanne Pope Melish spoke first, describing the immensity of the slave trade in New England and describing how New England began as a national leader in slavery.  Melish offered examples of current memorials to New England slaves, such as the painting featured on the lecture pamphlet, entitled The Economic Activities of the Narragansett Planters by Ernest Hamlin Baker.  Despite the title, the painting does not display “economic activities,” but several shirtless black slaves and a fully clothed white man on a horse.

Melish also described a memorial in Barrington, Rhode Island from 1903 dedicated “to the faithful slaves.”  She concluded her lecture with the question, what do these exemplary memorials do to the image of slavery/ of slaves and slave owners?

Keith Stokes, the Vice president of the 1696 Heritage Group spoke next.  Stokes offered his clear opinion of the appropriate memorialization of slavery in the United States.  Stokes shared a video created to memorialize the African children of the God’s Little Acre graveyard in Newport.  The graves date from the 18th century and every child buried there was either born or died a slave.  The video features names and information from individual graves as well as a picture of a child of matching age and ethnic decent.

Stokes described two different kinds of memorials to slavery in the United States.  Brown University’s campus features a memorial of a ball and chain.  This type of memorial focuses on the slave trade and objectifies slavery.  In contrast, memorials such as the Phillis Wheatley statue in Boston Massachusetts remember the individuals and honor the people, families, and their achievements.  Both types of memorials have their appropriate place, Stokes says, but for him, it’s the human memory that matters.

Brent Leggs followed, beginning with the idea that a nation’s identity resides in the places and stories that are honored and preserved.  White history, names, and stories are most often memorialized whereas black history, names, and stories are often lost.  Leggs focused largely on the recent upsurge of University effort to acknowledge their own history of slavery.  Leggs listed several Universities, including Yale University, which renamed a building after Polly Mary.  Penny Outlaw followed Brent Leggs as the last speaker.

Penny Outlaw works as the co-president of the Royall House and Slave Quarters historical landmark and museum in Medford Massachusetts.  In her work, she memorializes the past by presenting the lives of the salves of the Royall family home.  She gives tours and educates the public on the living condition of slaves in New England.  She told the story of her experience with a group of people, each connected by their common ancestry to American slaves.  The group spent the night in the slave quarters and shared what they knew of their family history.  Similar to Keith Stoke’s approach, Outlaw memorializes the past through the memory of the people, focusing more on the day to day life of the adults and children in the Royall home.

The speakers gave unique and personal accounts of the history of slavery in the United States.  Some shared examples of failed or counter productive memorials, others described and shared touching and powerful memorials.  Despite the abolition of slavery, America’s past clearly has some hold over American society today.  A meaningful memorial, then, does not just remember and recall, but brings awareness to the trauma and triumphs of not a the trade, but the people.