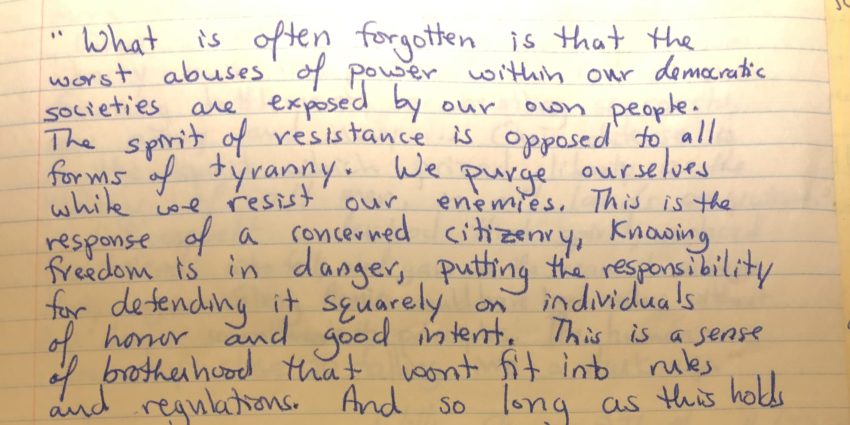 When I was in high school, I kept a light-blue three ring binder full of quotes that inspired me.  It went to college with me, and grad school.  It’s moved every time I’ve moved since 1980-something.  At some point, I stopped adding quotes to it—the most recent entry being President George W. Bush’s address to the national prayer breakfast in 2001, not long after 9/11.  I don’t look at the notebook often, but I keep it, now, as a reminder of my once-youthful idealism.

I pulled the notebook out the other day as I was beginning to think about this essay.  There was a passage I vaguely remembered about Roosevelt’s moral courage in World War II that I thought might provide a stunning contrast with events in Syria.  But as I turned the pages, smiling occasionally at the memories it brought back, I stumbled across another quote:

“What is often forgotten is that the worst abuses of power within our democratic societies are exposed by our own people. The spirit of resistance is opposed to all forms of tyranny. We purge ourselves while we resist our enemies. This is the response of a concerned citizenry, knowing freedom is in danger, putting the responsibility for defending it squarely on individuals of honor and good intent.  This is a sense of brotherhood that won’t fit into rules and regulations. And so long as this holds true, there will always be struggle, but there will be no final defeat.” [Emphasis added.]

The author was William Stephenson, a British spy stationed in the United States during World War II and known popularly by his reported codename: “Intrepid.”

Every single one of the persons I just mentioned was appointed by President Trump, except for Ambassador Yovanovitch and the original whistle-blower who are career-public servants.

In that same passage from William Stephenson that I quoted earlier, he went on to talk about the “brotherhood” of honor that unites those who serve ideals and principles.  Similarly, Ambassador Taylor described in his testimony the contrast and essential tension between America’s principled, official foreign policy conducted, as he put it, through “formal” channels that supported Ukraine’s effort to fight Russian aggression and join the West, and the “irregular, informal” diplomacy conducted by Rudy Giuliani that sought political advantage for Donald Trump.

Sometimes, in the day-to-day flood of headlines and events, it’s easy to feel overwhelmed and pessimistic about the current health of our republic.  But I find reassurance in the testimony of Ambassador Taylor, in the idealism that still exists in government, and in the loyalty of so many officials to the U.S. Constitution over the personal political interests of the president.  Stephenson, the man called “Intrepid,” finished his thought by noting that as long as the spirit of resistance to tyranny motivates those who serve, “there will always be struggle, but there will be no final defeat.”  In those words and in the events of recent weeks, I find hope.