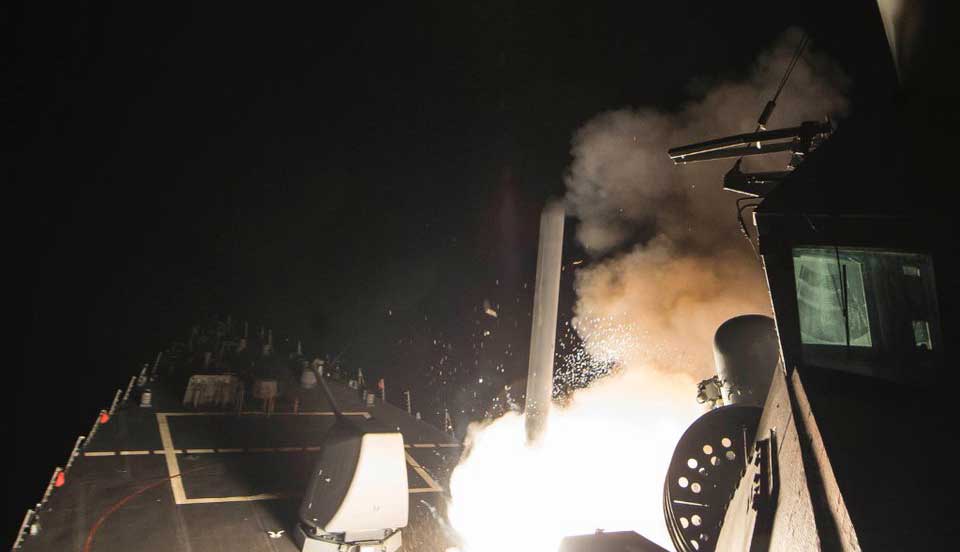 US strikes in Syria launched from USS Porter | YouTube

Dozens of U.S. Missiles Hit Air Base in Syria | The New York Times

Friday morning the number thirty-one top trending video on YouTube, beneath asapSCIENCE: “Are you normal,” celebrities eating hot wings and Jimmy Fallon and the Rock “photobombing,” is a video from the United States Navy showing Tomahawk missile launches from the USS Porter. The under-lit video spikes briefly as rocket engines ignite, revealing the deck of the Porter. There is no movement, no change, only a hiss and a bright light as a spark lofts out of frame.  Little on the deck of the Porter can be described as “human” and no crewmen or beings of any kind exist in the footage. Thursday night I watched the almost three-minute video in bed, in pajamas, full from dinner and icing my shoulder after the gym. When the video ended YouTube queued up another, footage from the U.S.S Ross, but below the queue it recommended “Impractical Jokers” videos, a web series from a video game magazine, and clips from the television show “Scrubs.” I sent the video of the Porter to two friends via Facebook chat, one called it “eerie.” Last night Brian Williams called the footage “beautiful” invoking the words of Leonard Cohen: “I am guided by the beauty of our weapons.”

YouTube is replete with videos of people dying. Should YouTube be unsatisfactory, any number of websites can sate one’s appetite for death; the social network Reddit contains a Subreddit titled just that: “/r/watchpeopledie.” After the video of the Porter I looked up “Tomahawk missile impact” and found a few videos of missile tests, the United States Navy blowing up ships in the ocean, and a video of an apparent Tomahawk strike on ISIS fighters; people died in that video. Following the impact, the fireball and cries through my computer speakers I closed out of the video and watched some clips from Impractical Jokers. I shut my laptop, went to bed, woke up for work, drove in with no traffic, sat and watched video of the U.S.S Porter again. At my desk in a Gilded Age mansion on Bellevue Avenue I consumed United States Military might. I watched AC-130 gunship training, A-10 Warthog strafes, and Nuclear weapons tests. Almost every piece of United States War Materiel is the subject of a YouTube video.

I was seven years old on September 11th, 2001. News spread through my elementary school and my teacher turned on the television in our classroom, a decision the merit of which I still wrestle with (my mother has no such ambivalence), and a classroom of twenty or so seven and eight-year-olds watched an event none of us could grasp. We fed off the fear, the consternation; the façade of calm put on by our teacher. When I went home my grandmother tried to comfort me, my father was trapped in Long Island, and my mother still at work. I remember one word: “terrorist.” My grandmother assured me no terrorists could get me in our den. Now I know she was unsure. We saw the smoke in our New Jersey suburb, and from then on my memory is shoddy. It is hard for me to untangle what I remember and what I’ve made myself remember. We went to war shortly after and for the majority of my life we were at war.

Soon children born after September 11th will graduate high school. Some of them already have driver’s licenses. We usually say this as a way to make ourselves feel old. To link the age of a young person to an event deeply seared in our memory, trauma so intense the taste remains stuck between our teeth. They’ve been at war almost their entire lives. Wikipedia claims the war in Afghanistan ended in 2014 and the war in Iraq ended in 2011. We know those figures aren’t accurate. Troops were still in Afghanistan into 2016. The wars continued, for some children the war comprised an entire lifespan. But war did not affect the overall trajectory of their lives. Some will say this is untrue, the war touched every facet of our lives.  They would be right. Policies related to war and related to the Post-9/11 reaction have shaped these children’s lives. But in a way, they don’t connect to the war. The trickle down policies, the professional military with no draft, the far away-ness of the conflict, did the war even really exist?

Watching missiles launch from the deck of the Porter I thought about myself at 15, myself at 16 and 17. I thought about those pieces of my teenage boy brain not completely formed on the world; not quite right. Now, who we want to call “young men and women,” are watching Tomahawk missiles fly through the dark and flicker out in the night. They see it happen on their computer screen. An image ends at the corners of the screen, behind it no depth. MIT sociologist Sherry Turkle, in studying social interactions, noticed through digital communication we tend to expect more “frictionless” interactions. While problems worked out through looking at another person are difficult, messy, and taxing, interactions through media like text and Facebook chat carry no burrs. Interactions are diffuse, sliding between relationships and persons easily. Images of war become just as slippery. War, the “#31 top trending video” on YouTube, takes on a flatness, an empty, disconnected image. Do we watch these videos delighted that our wars are as frictionless as our social lives?

Every few weeks or so I’ll be confronted with death in a small rectangle, only a few inches in area, on my Facebook feed. Soldiers shot in the head on camera, suicide bombs exploding; I once met a man who described to me his favorite videos of people dying. These are infinitely frictionless, able to be turned off at a moment’s demur. So much so I’ve grown concerned over myself. Concerned I can see atrocities, see death in front of my face and simply grunt, complain, and carry on unbothered. While September 11th, 2001 is a scar on my mind, I cannot remember all the videos and pictures of death I’ve inadvertently come across; or been sent as a “joke.” I watched the missile launch alone, atomized in a cloud of brute information, sanitized, presented flat.  My grandmother was scared on 9/11. Yet, each following “event” carried less sting. Awash in a collection of weak internet ties destruction, death, and fear, are stripped from their bearings, restructured, and “recommended for me,” as façade. Such digital manifestation breaks down the sinews of our most traumatic tendencies. – Francis Quigley