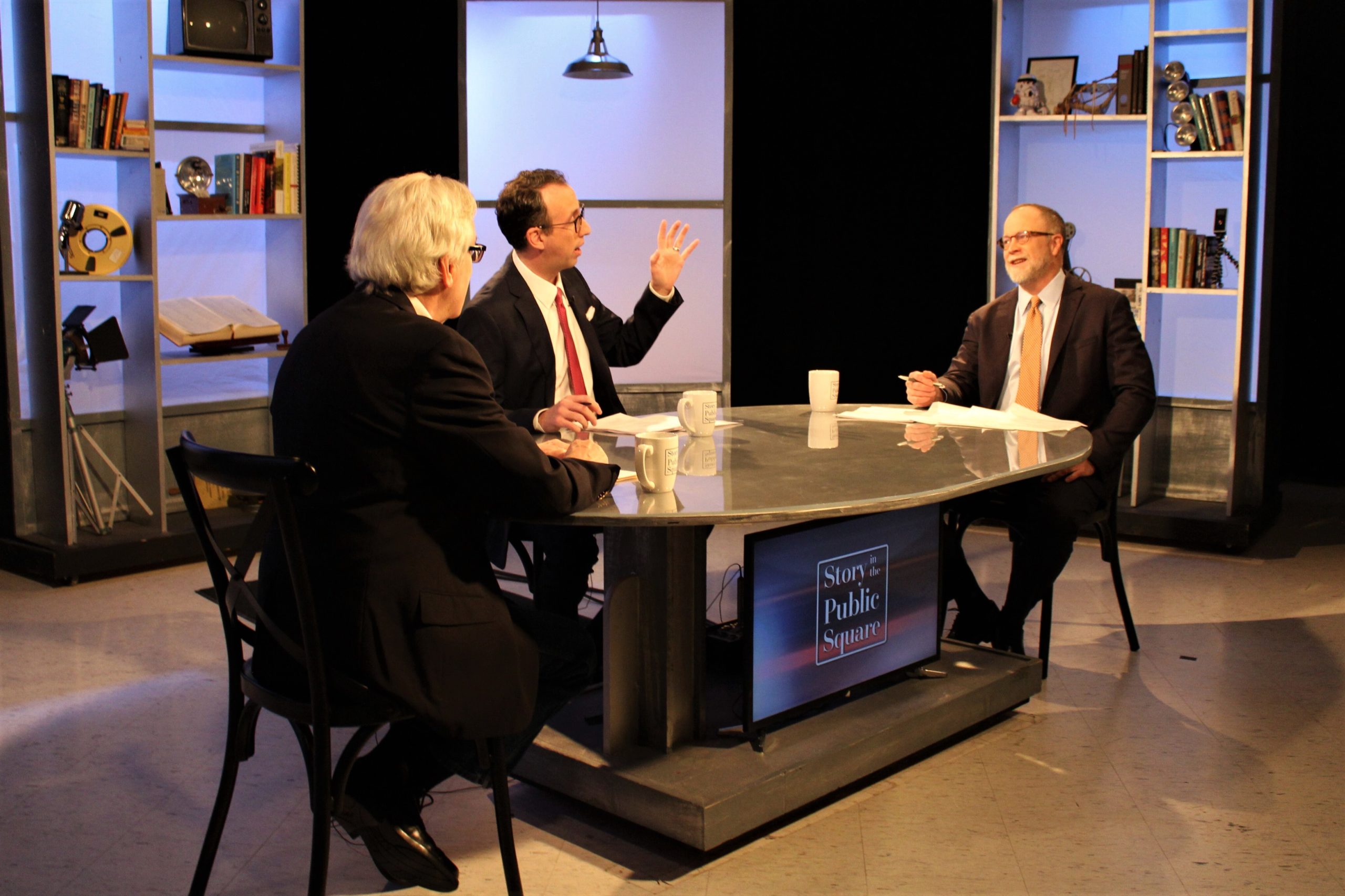 Each year since 2013, the Pell Center has announced the public narrative that has had the biggest impact on public affairs in the previous twelve months, the “Story of the Year.”

This year, co-hosts Jim Ludes and G. Wayne Miller agreed the story of the year is not a single story, but a greater phenomenon: the fracturing of America’s public narrative.

The broad outlines of this story have been visible for decades.  In the aftermath of the Second World War, and at the height of newspaper circulation in the United States, there were three nightly outlets for national broadcast news.  Three respected, elder journalists who shaped the public’s consciousness even while they did their best to remain dispassionate.

Michael Kennedy joins Ludes and Miller on this episode of “Story in the Public Square,” providing a sociological perspective on the current national narrative.  Kennedy is a professor of sociology and international and public affairs at Brown University and is the author of “Globalizing Knowledge: Intellectuals, Universities and Publics in Transformation.”  He has conducted extensive work with the sociology of public knowledge, global transformations, and cultural politics, focusing most recently on social movements, universities, and solidarity within and across nations.  Recent political events in the United States and the world have prompted Kennedy’s focus on cultural and public sociology.

Kennedy describes the vastly conflicting narratives on impeachment that dominate the American political sphere today, saying, “…this impeachment is such a […] critical time for our country.” “The old stories we used to tell about what sociology is have changed in part because of the status of truth has changed.”

“Today, we get our television news from entertainment companies, while many of us spend more time engaging with news on social media,” said Ludes.  “As a result, there is no longer a national narrative to help guide policy makers.  In addition, an agreed-upon set of facts has become increasingly more difficult to establish.  Look no further than the president’s impeachment defense which relies upon a set of talking points the President’s own former-Senior advisor on Russia warned—in sworn testimony before Congress—was nothing more than Russian disinformation.”

In the absence of an “American” narrative we can all accept, the public retreats into partisan positions ready to do battle with—or worse, ostracize—anyone who sees the world differently.

“The prevalence of social media as a means for public debate only heightens the tensions between individuals in a divided society.” said Miller.  “As a rule, we digitally yell at each other, rather than listening and engaging.”

In the mid-1920s, French essayist and philosopher Julien Benda looked at the political press of his time and warned that its zeal to stoke partisan passions was betraying the ideals of the West and setting the stage for another great war.

Nearly 100 years later, we have balkanized the American narrative so grievously that in the past year we’ve seen the American Attorney General mischaracterize a two-year investigation of the President—effectively muting the investigation’s conclusions.  This past summer, the White House re-drew a National Hurricane Center map with a sharpie, and we now have an impeachment investigation in which the President’s allies dismiss the proceedings whose most damning witnesses have all worked at the pleasure of the president as a so called “deep-state conspiracy.”

Self-government in a republic like ours requires deliberation and debate—even passionate debate.  But the success of self-government requires agreement about basic facts and a belief that the truth is knowable through reason.