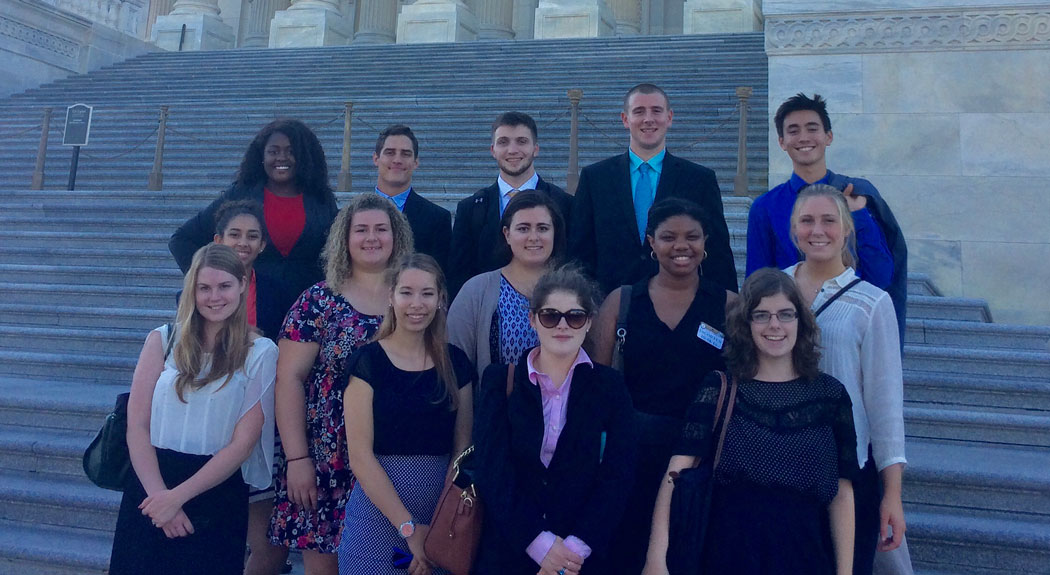 The 2016-2017 cohort of Nuala Pell Leadership Fellows traveled to Washington, D.C. in October, 2017, to explore leadership. Evie O’Callaghan, a fellow in the program, shares her experience in the following blog post:

Early in the morning, on Sunday 16th October, fourteen bleary eyed Fellows gathered at Rodgers Rec, excited to take on a whirlwind trip to Washington D.C.! By lunchtime, we had our feet firmly on the ground in the US capital. There was great hustle and bustle between getting from the airport to the metro to the hotel, and we quickly took off again on foot to visit the newly opened National Museum of African American History & Culture on Constitution Avenue. It was an honor to visit a place of such importance to the African American community and it carries immense educational value. With interactive exhibits spanning multiple floors, one can learn about African American culture and history from the time of the colonists all the up to the present day. We considered how African Americans fought for change in their nation and strove for liberty and equality.

After seeing the museum, we dispersed around the center of the capital and enjoyed a late lunch from the food trucks parked around the perimeter of the museum, enticed by the smells of spices and the melodies reminiscent of the mix of cultures present in the city that play over the sound of chatter and engines.

That evening, we met for dinner at the beautiful Old Ebbitt Grill, and were joined by guests Tom Hughes, former Chief of Staff to Senator Pell, and Jay Ghazal, former legislative assistant and advisor to the Senator. They spoke fondly of the Senator and his wife, whose lives had been devoted to making the world a better place through leadership and an attitude of servitude. We aimed to gain a snapshot in to the political world of Senator and Nuala Pell and to see how leadership effects change in the capital and beyond.

Come morning, we were again ready to go and explore the big city! Our first appointment was at the Carnegie Endowment for International Peace, a think tank that promotes peace through the development of new policies. Toby Dalton, Co-director of the Nuclear Policy Program and Saskia Brechenmacher, an associate of the Democracy and Rule of Law Program, took part in a question and answer session focused around their careers and the work done at the Carnegie Endowment. They spoke about how, in their jobs, they have the space to do a lot of research, to write, and to spread ideas.

Next, we hopped on the metro to Union Station, then walked to the Capitol building. We were seated in the room in which the Senate Foreign Relations Committee meets, which is really exquisite, and those walls have seen many extremely influential figures, even the Dalai Lama. We met with the Rhode Island Chiefs of Staff for Congressmen Cicilline (Kristin Nicholson) and Langevin (Peter Karafotas) who talked about career paths on Capitol Hill, and made it clear to us that to get ahead on the Hill, you need to be prepared to work hard and not think that anything is below you.

After a quick bite to eat, we went to Pennsylvania Avenue and met with Bernie McKay, Vice President of Corporate Affairs at Intuit, a computer software company. He is also a trustee of Salve Regina University. He highlighted the value of critical thinking in a workplace, and even went as far as to say that it can outshine other skills, such as public speaking and charisma, that people might often associate with success. However, it is also vital to show humanity, as Mrs. Pell did, in her more subtle style of leadership, “soft diplomacy,” which can be even more effective than leading overtly.

Our next destination was the Hart building, the location of Senator Reed’s Washington office, where we met with the Chiefs of Staff for Senators Reed (Neil Campbell) and Whitehouse (Sam Goodstein). They too spoke about their career paths, and taught us some of the fundamental attitudes that one must show to be part of the staff. For example, one must work hard as it is an honor to be there, one must have a team-oriented attitude, and must remember to be a strong negotiator, but not too strong as not to alienate people.

We hopped on the metro from Union Station back to our hotel, and Elliot Maxwell, a Consultant and Trustee of Salve Regina, joined us to talk about digitalization and its benefits and drawbacks, as well as some of the gaps in the job market at the moment that will help to propel new discoveries in technology. The world needs big new ideas.

After a fast-paced day in the capital, the Fellows headed in to the city to explore some of the sights, as for some, it was their first visit to Washington D.C. A few people had dinner at a well-regarded Chinese food restaurant, some people went to Dupont Circle, and others headed over to Georgetown on the metro and polished off some cupcakes.

On our last day in city, we knew it was going to be a good one! We watched the morning sun over the Potomac River before entering the Embassy of Liechtenstein to meet the gracious new Ambassador Kurt Jaeger. He gave us an insight into some of the wisdom that he has gathered over the years, as well as a brief overview of Liechtenstein and how it is similar to and differs from the US.  We learned that cultural norms are quite different and that some pieces of legislation were approved in Liechtenstein much later than in the US.

Next, we were fortunate enough to visit the World Bank, a sprawling skyscraper of breathtaking capacity that does some very important work on a global scale. Its aim is to end poverty and is a lender of money to governments instead of individuals. Bayo Oyewole (Lead Partnership Specialist, IFC), Claudia Zambra Taibo (Consultant), Bledi Celiku (Economist), Adrienne Hathaway (Research Analyst), and Rebecca Gilsdorf (Communications) met with us to discuss some of the pathways to a career at the World Bank, some of the work that they have carried out, and some of the challenges they face every day as well as what makes the job so worthwhile. They explained that every project is meticulously researched, and is designed specifically to meet goals of the region, which might range from working to end hunger in one area of the planet to building a road in another. They opened the discussion to questions from the Fellows, and then, we had lunch at the large and diverse cafeteria.

We then left to meet with Rear Admiral Barry Black, 62nd Chaplain of the US Senate. He gave a compelling presentation about how to ‘stupid proof’ one’s life. His background is inspirational; he had grown up in poverty, and had access to just one record, by a former Chaplain of the US Senate, which he learned verses verbatim, and can, to this day, recite. This showed us that with persistence, we can get to wherever we want to go in life.

Wrapping up the day, we toured the Capitol building, including the Senate Chamber and the Press Gallery with John Mulligan, who was very informative and answered our questions very well. We saw terraced phone booths in the press office where people in days gone by would make their phone calls. The Senate Chamber was very grand and we learnt about where certain Senators would have sat.

As a final destination before we went to the airport, we visited the National Portrait Gallery and admired the architecture while relaxing and mulling over all that we had seen and done on our swift trip.

To sum up, there was a lot of value packed into two wonderful days of learning and discovery and it is a trip that none of the Fellows will ever forget. – Evie O’Callaghan, Marketing, England, United Kingdom