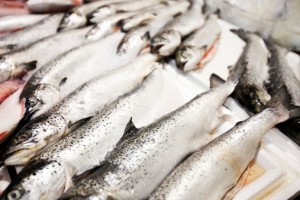 Era of cheap fish is over, says expert, as industry forced to tackle slavery and overfishing | South China Morning Post

Slavery and the Shrimp on your Plate: Thai Seafood Is Contaminated by Human Trafficking | The New York Times

For most of us, most of the time, the “supply chains” that bring us food or other goods are basically invisible. But once they are brought to light, we have important choices to make about these systems that provide the things we want and need. Specifically, American consumers of fish should be aware that there is a good chance that slave labor was used to produce their sea food – but that there are steps that can reduce the problem.

This week the South China Morning Post (Hong Kong) published an interview with the author of ‪The Catch: How Fishing Companies Reinvented Slavery and Plunder the Oceans. The book paints a disturbing picture of how fishing fleets in the Pacific, sometimes unregulated, sometimes operating illegally, are creating two huge problems. First, through rampant overfishing they are bringing fisheries closer to collapse – an economic and ecological disaster if it should happen. Second, they are operated significantly by slave labor.  In June, the New York Times published an article which, citing a State Department report on human trafficking, suggested that over half the Thai fishing fleet may be slave labor – several hundred thousand individuals in this fleet alone, working against their will, in horrible and abusive conditions, for little to no pay.

The good news is that as governments pay more attention and take stronger steps, human trafficking can be eliminated from supply chains in seafood and other industries. California passed its Transparency in Supply Chains Act in 2010, and now requires “retail sellers and manufacturers doing business in the state to disclose their efforts to eradicate slavery and human trafficking from their direct supply chains for tangible goods offered for sale.” The downside for consumers is that as illegal and unregulated fishing practices are brought under control, “the era of cheap fish is over” – according to the author of The Catch. So the choice is ours: How much attention are we willing to pay, and how much money we are willing to spend for fish that isn’t caught by slaves?- Joseph Grady, Senior Fellow for Public Policy

Republicans and the Future of Negotiations with Iran

If you’re a political animal, Tuesday night was big.  Republican dominance in the House was strengthened while Democrats lost the Senate.  The results will certainly affect the final two years of the Obama presidency, but the Republic control of both houses of Congress will have a mixed impact on foreign policy.  It’s not just that the President enjoys wide latitude in foreign affairs, it’s that on key issues, there is bipartisan consensus opposing the President.  Look no further than the nuclear negotiations with Iran.

Congress is highly skeptical of any nuclear deal with Iran.  The last time the Senate voted on sanctions against Iran, it passed 99-0.  That’s beyond bipartisan.  Congressional opposition stems from a softly-spoken concern that the Obama administration is perhaps too eager to get a deal with Iran done.  I don’t personally buy that argument, but Congress, in part motivated by concern over Israel’s security, doesn’t want to take its boot off Iran’s throat—metaphorically speaking—if a deal leaves Iran with the potential to rapidly built a nuclear weapon.  Secretary of State John Kerry has reportedly said Iran wouldn’t be able to build a bomb in one year.  Members of Congress and Israeli officials would be more comfortably if the margin was two years.  The variables up for negotiation are the stockpile of fissile material Iran holds onto after any deal and the number of centrifuges the country can preserve to enrich uranium. Look to the President to lift sanctions with executive order and not seek any formal ratification in the Senate.- James Ludes, Executive Director