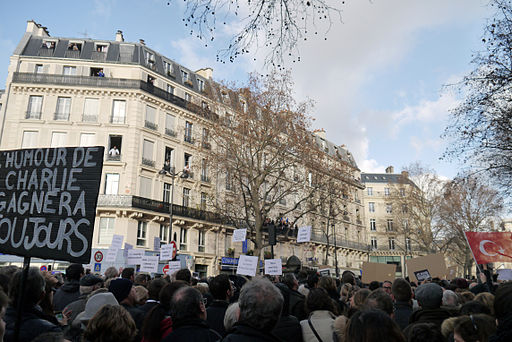 “Lafayette, We are Here!”

White House: We should have sent someone to Paris march | USA Today

U.S. embarrassed by lack of top-level figure at Paris March | The Washington Post

President Obama should have been at the march in Paris.  It was a singular moment in the world’s response to extremism.  It was powerful imagery, a tremendous message, and a lost opportunity for the president.  In Paris, he could have stood shoulder to shoulder with a coalition of leaders dedicated to confronting extremism.  He could have honored those who died on the same soil where they perished.  Perhaps most importantly at this moment, President Obama could have reaffirmed in ways long-forgotten the ties between the United States and France.

On July 4, 1917, the lead elements of the American Expeditionary Force, newly landed in France and not yet tested in battle, paraded through Paris to the grave of the Marquis de Lafayette, the French military officer who at the age of 19 came to the colonies to offer his support in the  American Revolutionary War.  He served as an aide to General George Washington and returned to France at the end of the war a wounded veteran of the fight for our independence.  There, at the tomb of the man whose grave includes soil from Bunker Hill, an American staff officer by the name of Charles E. Stanton offered the following greeting to the people of France:

The fact cannot be forgotten that your nation was our friend when America was struggling for existence, when a handful of brave and patriotic people were determined to uphold the rights their Creator gave them — that France in the person of Lafayette came to our aid in words and deed.

It would be ingratitude not to remember this and America defaults no obligations….

Therefore it is with loving pride we drape the colors in tribute of respect to this citizen of your great Republic, and here and now in the shadow of the illustrious dead we pledge our hearts and our honor in carrying this war to successful issue.

Who Pays? A Distributional Analysis of the Tax Systems in All 50 States | Institute on Taxation & Economic Policy

A new report on who pays how much in taxes shows that for most Americans, the lower your income, the higher percentage of it you pay in state and local taxes: “Virtually every state tax system … [takes] a much greater share of income from low- and middle-income families than from wealthy families.” A Washington Post opinion piece points out, based on the report, that “the poorest fifth of Americans will pay, on average, 10.9 percent of their incomes … the middle fifth will pay 9.4 percent .. [and] the top 1 percent will pay … only 5.4 percent.” In the opinion of the writer, this amounts to “redistribution from the poor and the middle class to the wealthy.” No matter where we live we have choices to make about how we pay for roads, schools, court systems, libraries and all the other public institutions and systems that are foundations to our way of life. States and towns clearly have some more thinking to do about whether they are approaching the revenue task in the right way.- Joseph Grady, Senior Fellow for Public Policy