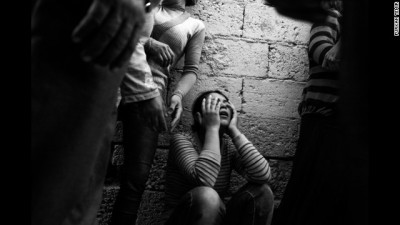 Every day, floods of people gather into the camps and centers in Kobani: about 5,000 new refugees each day.  Photographer Furkan Temir released eleven photos into the news, all showing the faces of the refugees, each photo in black and white.  One photo shows a mother and her child, centered in the frame, the mother gazing despairingly toward the ground.  Another shows a large group of men watching warfare not far off.

Despite the differences, all the photographs share shadowy similarities.  A man carries a sack three times his size, crouching under its weight and shadow.  Several men carry three coffins, the coffins blocking the sun from reaching the tops of their heads.  Another photo shows a woman, slumped down amidst a large group of standing people visible only from their waists down.  The woman covers her eyes with her hands and stares upwards; her mouth is open as if she is crying while she mourns the death of a YPG (Syrian Kurdish militia) fighter.  All of these thousands of refugees flee the cruel killings of terror groups, but much of the terror follows them, as seen on the faces in the photos.

The last photo provided shows a woman standing alone against a cement wall, her back toward the camera.  The caption tells that she “tries to reach someone by phone.”  The viewer can only wonder who she called or if she reached them.  Her call in the camp’s “safe zone” might have gone through, but so much is left unsaid in these photos veiled in shadow.