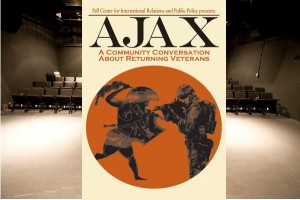 NEWPORT, RI − The Pell Center at Salve Regina’s Story in the Public Square initiative has announced the five upcoming tour dates for its readers’ theater production of the Greek tragedy, “Ajax.” The play, set during the Trojan War, will serve as a statewide conversation focusing on the issues veterans face when returning home. Each performance will be followed by a community forum on veterans’ issues.

Sandywoods Center for the Arts

The performances are free and open to the public. To register, please visit the Eventbrite page on AjaxInRI.eventbrite.com.